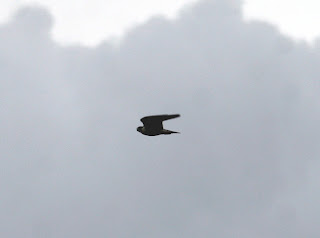 ng more foul weather and lack of birds (see yesterday) but a slightly better morning perked up members especially after the first Osprey of the autumn was mobbed by gulls as it flew south between the islands and the West kirby shore and then turned right over Little Eye and was lost to view. No pictures are available as it was not picked up until well passed Hilbre. Three Peregrines were also noted this morning (right,photo CJ)
Largest counts for some time were made of Shelduck (102), Bar-tailed Godwits (130+) and Great Crested Grebes (23) with 2 Shags and a Little Egret also present.
Migrants included 20+ Swallows, 3 Wheatears and a Goldcrest.
(DB,CJ,KMc,CDT,PT,DNW,PGW,SRW)
Posted by Colin at 17:57