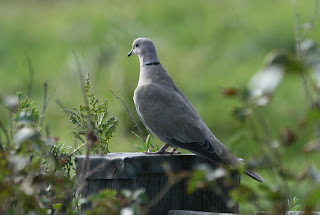 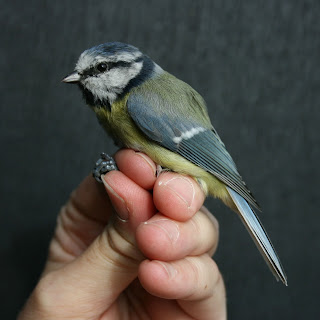 A few Swallows passed overhead and at least 300 Meadow Pipits moved south. Grounded migrants included a few Chiffchaffs and Goldcrests but more unusually a Great Spotted Woodpecker flew low south through the Obs garden down the East Side and a Blue Tit was heard calling a flew over the Obs.
Both birds are scarce on Hilbre (despite breeding on the nearby mainland) and the Blue Tit was later relocated in the SK trapping area and was subsequently caught and ringed (see photo above left).
Other birds included a Collared Dove which spent the morning on fences and on top of the traps (see photo above right; on Old Obs fence). All photos by SRW.