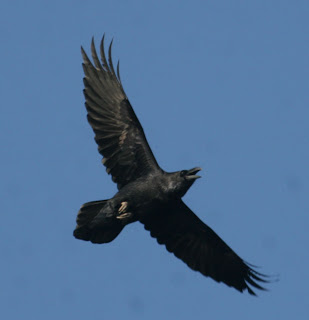 With a southeasterly breeze and heavy mist around the estuary this morning good things were expected, especially following early news of a Yellow-browed Warbler at nearby Red Rocks. Although the hoped for rarity did not materialise migration was steady with sightings of 10 Skylarks, 16 Swallows, 5 Grey Wagtails and finches including 2 Goldfinches, a Greenfinch, a Lesser Redpoll and a Reed Bunting. 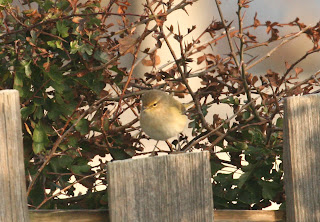 Chiffchaffs (right) were again grounded, 10 in total, adding to this warbler's good numbers on Hilbre this year.

A flock of 6 Wigeon flew across before the tide (this species has also been recorded regularly lately), but best of the day for the obs members present was the spectacle of 5 Ravens (above left and below) moving low around the island and interacting with the local Carrion Crows. 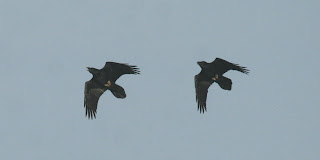 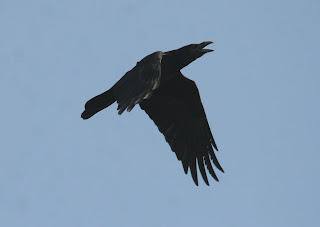 Trapped for ringing were 4 Chiffchaffs (one of which was a long winged individual which was thought to be of the Fenno-Scandinavian race abietinus)(left), a Goldcrest, a Greenland Wheatear and a Song Thrush.