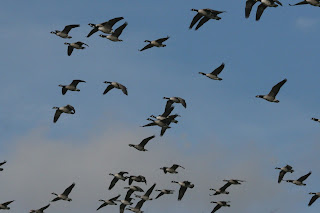 The wind was northerly overnight, but had moved round to a brisk north-easterly by 7am. Cloud cover produced a small fall of Goldcrests (c15) and Robins. There was some visible movement overhead with c150 Meadow Pipits, 5 Grey, 2 Alba and a single rather late Yellow Wagtail over.

A juvenile Sabine's Gull was seen 'at sea' (south west of the North Wirral windfarm) but could not seen from the island! On the way off the island observers were surprised to see a large flock of c150 Canada Geese flying from the Tanksies to West Kirby - not unusual for the mainland but a large count for Hilbre and included at least one Greylag (see photo above - you can just make out the Greylag bottom left!). 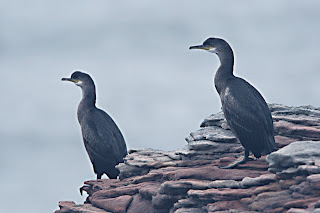