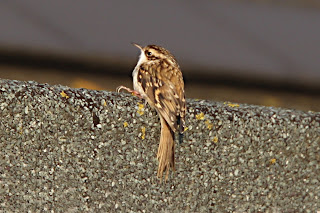 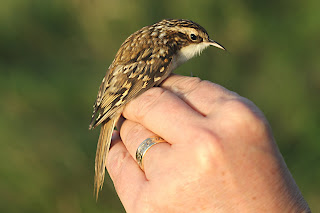 Observers were greeted with a light west south westerly wind so hopes were not high for a repeat performance of yesterday. Incredibly the only three grounded migrants included a Treecreeper which was found lurking in the SK trap (above left). It was ringed and released whereupon it alighted on the guttering of the Whiteley's bungalow (see above right). A very rare bird at Hilbre - only the fourteenth record for the island. (The other grounded migrants were single Goldcrest and a Wheatear). Another island scarcity was a Stock Dove that passed over. All photos by BSB.