A quiet start to the day in the dark (because of the early tide) with a crescent moon in a clear sky and a cool breeze, burst into life when a cloud of approximately a thousand Starlings (right) flew low over the south end of the island and off to the west. 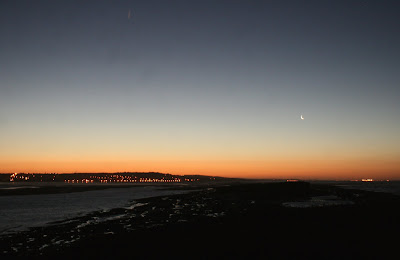 There had obviously been a thrush movement overnight as it became clear there were 7 Song Thrushes and 3 Blackbirds around the paddocks and gardens, and also a Dunnock.
A sea-watch produced little except 3 Teal and a few G C Grebes and Common Scoters.
As the tide ebbed records became more interesting with an Eider close to the east side, a Snipe between the islands with the shore waders and 2 Whooper Swans flying west towards the north shore. A commotion that disturbed all the waders and Brents proved to be a brief appearance of a Common Buzzard north of Middle, unfortunately the bird could not be relocated despite an active search. Seven Wigeon (below) flew north along the east side, and 14 Black-tailed Godwits went south passed Middle. 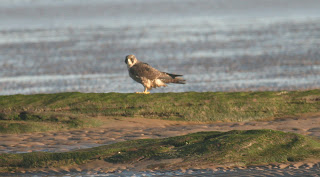 On the way off the islands a large female Peregrine (above left) was seen sitting on the rocks near Little Eye but only 2 Snow Buntings (below) could be located there.

Four Song Thrushes were trapped for ringing.
(CJ,PGW) All photos CJ
Posted by Colin at 13:31

Do you live on Hilbre or visit everyday?

(I'm just up the road in Hoylake).