Cloudy but quite clear this morning with very little wind and it soon became obvious that there was less visible movement overhead. Still 10 Blackbirds and 3 Song Thrushes on the ground but no finch migration other than a few Goldfinches on the island and a fly-over Brambling.
A male Sparrowhawk (below left) was harassed by a local crow, and a female (below) later did a repeat performance and then flew south along the island. 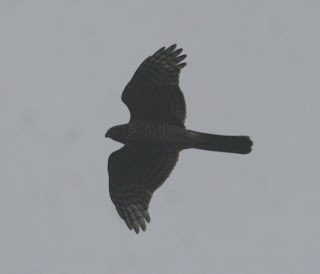 Fifty six Pinkfeet Geese flew from the Point of Ayr in front of the wind farm and off towards the Lancashire mosslands, meanwhile the wintering Brents are still at 93 birds (similar to the maximum count in October).
The Immature/female Eider was still off the west side and 2 Little Egrets to the east of Middle.
Birds ringed today :- 4 Blackbirds, 2 Song Thrushes, and a Meadow Pipit.
(AAB,CJ,KMc,PGW,SRW)
Posted by Colin at 13:27