Weather, SW 1, later N 1,  warm sunshine
The fine weather did not produce many migrants, just a single Willow Warbler in the paddock early on and a Whitethroat that arrived from the sea and dived into the bracken on Middle Eye. Four House Martins went through but no real Swallow passage to add to the feeding local birds. Three Arctic Skuas were around the island, a dark phase went down the east side and scattered the other birds present, another dark phase seemed to drop down and feed a juvenile waiting on the sea. Seven Great Crested Grebes and 2 Common Scoters were the only other attraction on the sea apart from the many terns feeding there. Shore birds included a Little Egret, a Bar-tailed Godwit, 20 Sanderling, 60 Ringed Plover and 132 Curlew. Belated news today of a Purple Sandpiper present at the north end slipway for a while on 19th July (John Coupe), single summer occurrances such as this happen most years. A female Peregrine came low over the island after chasing the waders on the east side. Highlight for the observers staying the tide was a Hummingbird Hawk Moth that fed on the Buddleia in the obs garden for 5 minutes. 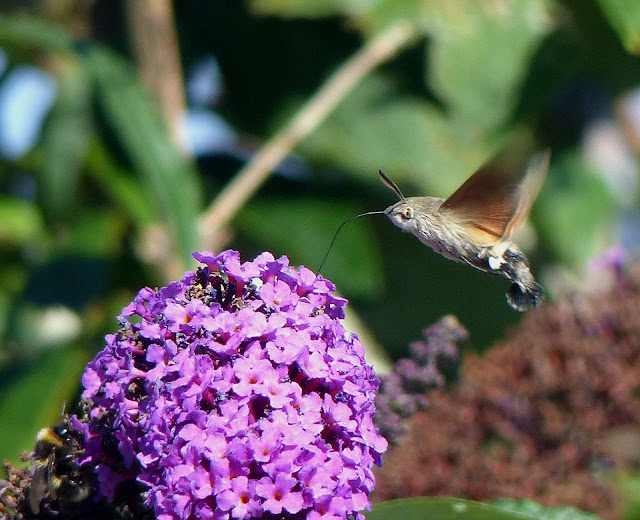