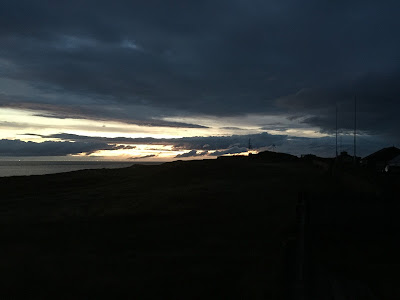 The day consisted mainly of rain! Early morning was clear but devoid of any migrants, the distant squalls soon arrived and made observing difficult, a couple of Wheatears made it in between the showers and waders gathered around the island as the tide flooded, the roosting terns were temporarily disturbed by a dark phase Arctic Skua.The visibility improved on the evening ebb for a short time and revealed four more dark phase and two light phase Arctic Skuas, over 1000 Sandwich & Common terns, 28 Great Crested Grebes and 4 Gannets, also a Peregrine patrolling the west side of the island. Whimbrel dropped in bringing the day's total to 10, Curlew numbered 60 around the islands and 27 Shelduck flew into the estuary. An additional 7 Wheatears were the only migrant passerines of note and the two Rock Pipits remained around all day.
Ringing: Dunnock 3. Meadow Pipit 1      [ 370-34 ]
(CJ,NDW,RTW,CJW et al)           photo  CJW
Posted by Colin at 07:12