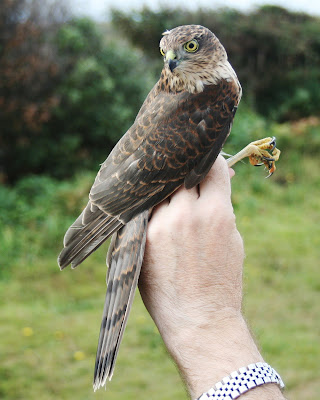 Highlight of a mostly cloudy but humid day was the visit of an immature male Sparrowhawk that toured the island a couple of times and then was trapped and ringed following a hastily erected mist net in the obs garden (left). A Greenshank was heard from the direction of middle Eye but was never actually seen during the morning, meanwhile the general build up of wading birds continued with the appearance of a flock of 40 Knot, the most seen near the island this autumn. Seven Swifts were overhead, almost as expected in the muggy conditions with rain about. The 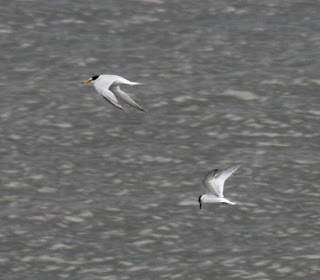 only land migrants were 2 Willow Warblers which were not caught for ringing. A single light phase Arctic Skua chasing a tern out to the north west was the only one of its group noted today, although both young and adult Little Terns gave a good show fishing to the east of the island after the tide (right). Ringed:- 1 Sparrowhawk, 1 Robin. (DB,JE,CJ,KMc) [696-41] photos CJ