A mild easterly (much warmer than yesterday 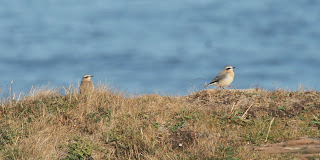 morning !) produced a good autumn Wheatear day of 15 birds (left), but with most staying near the north end some of the potter traps were 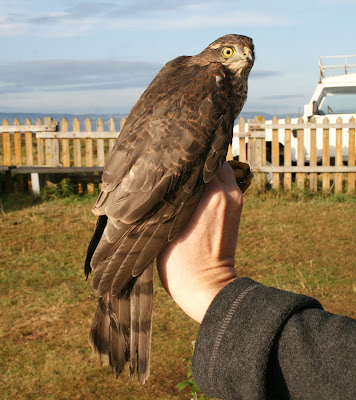 transported to where the birds were, and 2 were ringed from that area. A female Sparrowhawk was first seen in the old obs garden and was later trapped in the 'SK' (right). This is the second ringed this year following a male 2 weeks ago, but only the fourth female out of the sixteen ringed over the years. Also a repeat catch was a Swallow (below) in the old obs mist net following one 3 days ago and another at the end of July. Most of the 70 or so Swallows seen today were passage birds and 2 Sand Martins were flying through with them. Willow Warblers stayed for most of the morning, with 3 of the 6 present being ringed, and then in the afternoon after the breeze had backed to the north east a Garden Warbler was a good find around the paddocks and a fine addition to the ringing total for the day. The afternoon also produced the best wading bird when a juvenile 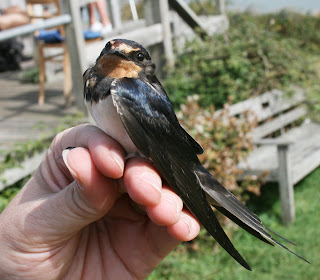 Curlew Sandpiper posed briefly on the ridge south of Middle. The ridge featured early in the morning when again large numbers of Ringed Plover were amongst the stony reef before the tide, this time about 1,200 were estimated with many Dunlin and a few Sanderling. Good numbers of other waders today included 2,000 Dunlin, 2,000 Knot, 12 Bar-tailed Godwits, and 6 Whimbrel. One of the Dunlins feeding in the east gutter was a partly leucistic individual that at first glanced more resembled a Sanderling. Sea birds were extremely scarce with just a single Gannet and Guillemot to be logged. Ringed:- 3 Willow Warblers, 2 Wheatears, 1 Swallow, 1 Sparrowhawk, 1 Garden Warbler, 1 Robin. (DB,JE,CJ,KMc,CJW,PSW et al) [734-42] photos CJ