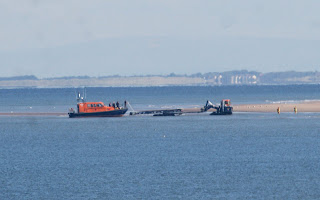 August, a phone call from a member on the East Hoyle shore at Hoylake (who was attending the arrival of the RNLI's experimental FCB-2 carriage Lifeboat, right, which is the precursor to the new Hoylake Shannon class lifeboat) excitedly told of a large dark raptor which had passed right overhead and was travelling west across towards Wales. The island observers finally caught sight of it as it passed about a mile off to the north west over the sea and it was followed through a telescope until it arrived near the Point of Air and circled gaining height. It spent some time thermalling until it disappeared into the clouds. Although at some distance from the island, several clinching features of Hilbre's first BLACK KITE were noted in good light and these along with the good views of the original finder (seen low overhead) we hope will prove sufficient to be accepted as Wirral's second Black Kite (following one found by Hilbre members near Barnston in April 2007). 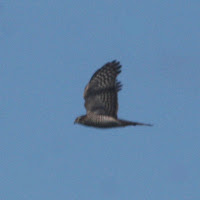 During the efforts to see the kite, a Sparrowhawk flew south closely passed the observers (left). The rest of the morning did not live up to the standard of the last half hour, 3 Wheatears (1 trapped), 2 Willow Warblers, a Chiffchaff and a Whitethroat were the only land migrants, with a few Swallows passing south. On the rocks south of 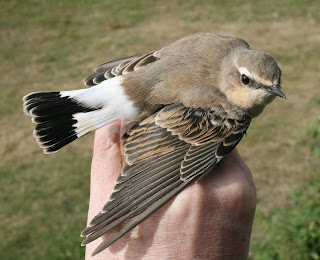 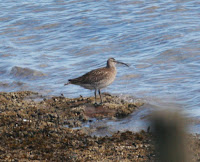