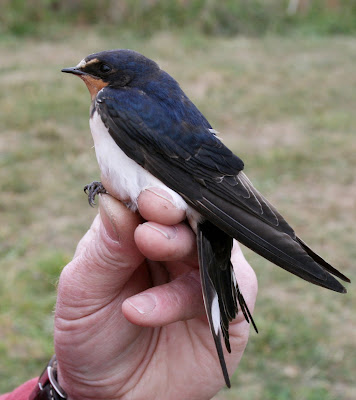 A Swallow found its way into the old obs mist net mid-morning, we don't ring that many Swallows on Hilbre, but this is the second this year. Most ringed on the mainland are either ringed as nestlings or caught at communal roosts which don't happen on the island. Even though the wind veered south east during the night there were scarcely any migrants on the ground. Two Wheatears were found separately, one just after dawn which promptly disappeared and then another at 10.00hrs. The only warbler apart from a Whitethroat that was ringed some days ago was a Willow Warbler that was extracted from the old obs mist net. The only real excitement occurred when observers heard an unusual bunting like call several times but the culprit could not be located. Fifty plus Little Terns were to the east of the island feeding in the area where the 500 Sandwich Terns roost. Seventy Five Sanderling, 3 Whimbrel and a Shag complete the log sheet. Ringed:- 1 Swallow, 1 Willow Warbler, 1 Linnet, 1 Robin