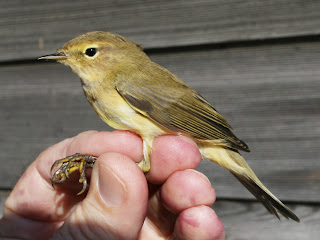 Another sunny start to the day, this time a southerly soon veered to the west but not before landing a couple of Willow Warblers on the ground. Later in the morning a Chiffchaff (left) arrived 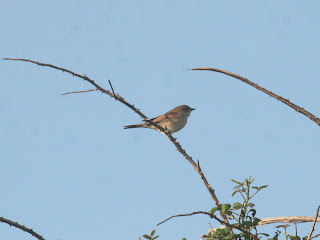 fresh in and was trapped in the Newton, this is the first hopefully of many this autumn and it was a particularly small and yellow individual. Two Whitethroats were seen feeding in the same bush (right) in the paddock and 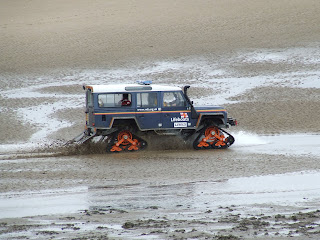 in the afternoon they were both trapped separately, one being found to be the bird ringed on Thursday last, the other apparently new to the island. No Wheatears present today. Small waders around the islands today seemed to contain quite a large number of Ringed Plovers, definitely in three figures, also several hundred Dunlin and small flocks of Knot and 4 Bar-tailed Godwits, although Redshank seem to be almost entirely absent at the moment. The RNLI turned up on the island on manoeuvres in a most interesting looking vehicle (left). Ringed:- 2 Willow Warblers, 1 Chiffchaff, 1 Whitethroat, 1 Robin. (JE,CJ,CLW,SRW,TGW,CJW(f),GIW) [719-42] photos CJ & JE