With the wind picking up to force seven overnight, and still in the north westerly quarter, sea-watching was definitely the main focus today especially with nothing round the traps .... perhaps the first 'null day' on the ringing front for some time. However, observers returning to the island early evening caught a new Robin avoiding a blank day after all! 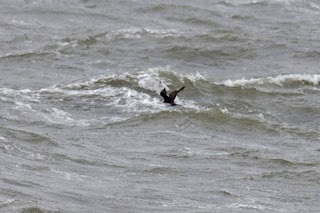 Whilst there were plenty of terns passing by it didn't 'feel' good on the sea with only one Kittiwake before and another immature after high tide and no Gannets, Fulmar or the hoped for shearwaters. Three each of Guillemot and Great Crested Grebe were expected. However, skuas were in attendance of the Sandwich Terns in particular with at least twelve Arctics (left) seen as well as single Pomarine and a Bonxie making the list look better than it felt. The Pomarine also harassing a Herring Gull for some time. 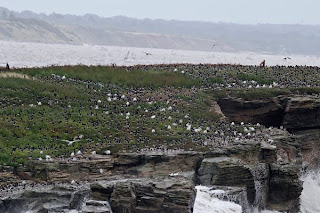 The big tide pushed roosting waders right on to the top of Middle Eye during high tide when a single Redshank sheltered just outside the sea-watching hide. Knot and Ringed Plover attempted to roost on the North End pools but sea spray saw them off.