A complete contrast in the weather from yesterday with a fresh north-westerly (up to force five) prompting some overdue seawatching; although this was mostly from the comfort of the Obs veranda to shelter from intermittent downpours.
Up to 25 Gannets, 500 Sandwich Terns, 17 Common Scoter, 5 Great Crested Grebes and 55 Little Terns were noted but the highlight was a Bonxie drifting in menacingly from the east.
Surprisingly, considering the conditions, 10 Wheatears were present, plus 2 new Willow Warblers and several Robins arrived. Single Willow Warbler and two Robins were ringed. 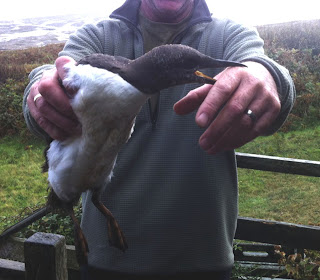 A stranded Guillemot was reported to the Obs and subsequently rescued from the beach near Little Eye. It was released off the North End and swam strongly away watched by a junior member (below), but not before it 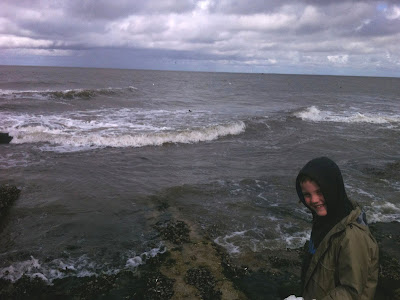 had left a reminder or two of the incident with its rescuer! (above)
Also between Little Eye and West Kirby an adult Mediterranean Gull was seen as observers left the island in the afternoon.
(CLW, SRW, TGW, CJW (f), GIW -from over; NDW, PSW) [737-42]