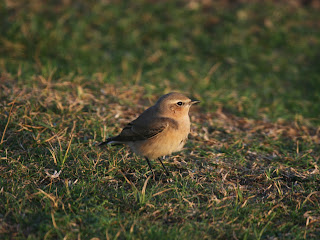 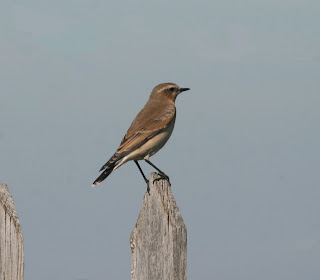 With the wind back in the south east and the temperature rising hopes were high for more autumn migrants and possibly a rare bird this week. There were 5 late Wheatears (above), none of which were ringed, also 7 Goldcrests and 5 Chiffchaffs and a few other movers that did not stay including some Meadow Pipits, 7 Skylarks, 3 Grey Wagtails, a couple of Blackbirds and Song Thrushes and a single 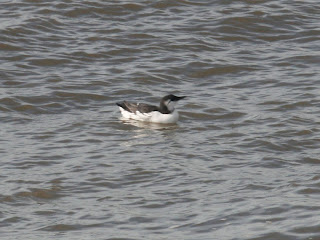 flock of 6 Swallows. One of the major news stories of today was the appearance of the first Brent Goose of the autumn on the east side which was later seen to fly away some distance, possibly not to return, tomorrow will tell. A Sparrowhawk scattered the waders roosting the very high tide on Middle, and was the only unexpected bird of the day. The sea in these calm conditions was quiet, just 8 Gannets, and 3 Guillemots (right), also not many Sandwich Terns remaining, 13 were counted. Ringed :- 3 Chiffchaffs, 3 Goldcrests, 2 Meadow Pipits, 1 Dunnock, 1 Blackbird. (DB,CJ,KMc,CJW, et al ) [832-43] photos CJ
Posted by Colin at 18:31