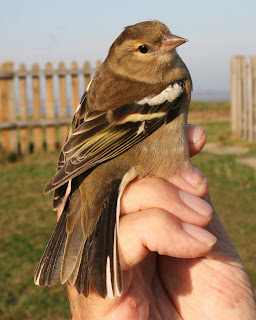 The sun continues to shine and the migrants trickle in during the daytime as they did yesterday. Not quite so many Chiffchaffs, but a Garden Warbler at dawn and a female Blackcap during the morning was fine compensation. A steady passage of Meadow Pipits floated through throughout the day, finches were few but the first migrant finch of the autumn to be ringed was a Chaffinch (left) which was one of 2 passing through, also 2 Goldfinches hopefully fortelling a good passage of finches in the next few weeks. Other late autumn species present today included 2 Common Snipe between the islands early in the morning, a Wigeon, a Reed Bunting overhead, a Song Thrush and 2 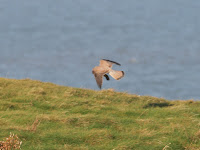 Skylarks, while 4 Swallows were a reminder of summer (as was the weather). A Peregrine sat on the beach off the east Hoyle, and a Kestrel made a short visit to the island plunged into the nearly dry island pond and pulled out a large Short-tailed Field Vole (right). Twenty eight Sandwich Terns still remain, other sea birds logged were a few Guillemots and