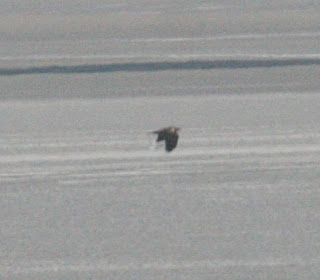 A Wheatear perched on top of a furled mist net at dawn in the paddocks lifted spirits that this was to be a good passage day, but it proved to be a false dawn as this was the only Wheatear of the day and all that could be found was a single Chiffchaff. At 07.00hrs a Marsh Harrier (right) flew across the east hoyle tide line and off towards Red Rocks whilst being mobbed by the shorebirds, apologies for the distant photo in poor light. A Whitethroat dropped in at about 08.00hrs and another later on, somewhat compensating for the lack of migrants in the apparently ideal conditions. The difference in 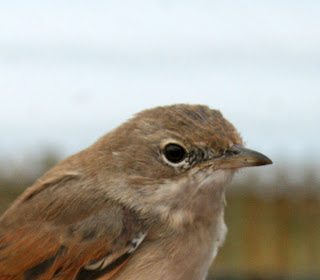 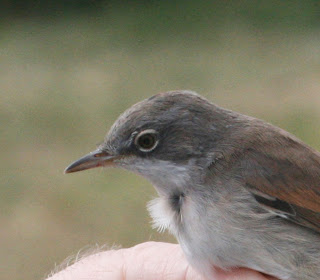 appearance between a first year bird and an adult male could clearly be seen (above). A party of 6 Teal arrived off the whaleback but immediately took off and disappeared to the north (below), another group of 3 were sighted just before noon. A single pale phase Arctic Skua flew in from the west and robbed a tern of its lunch, the sea was otherwise very 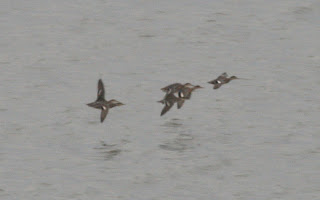 quiet, only 3 Great Crested Grebes being of note. Wader counts from before the tide included 5,000 Oystercatchers, 450 Knot, 150 Dunlin, 15 Sanderling, and an improved number of Bar-tailed Godwits at 24 birds. A Peregrine gave a fine display of wader chasing by the obs at noon and a Kestrel was present briefly this morning, Kestrels have been rather more scarce this year. Ringed :- 2 Whitethroats, 1 Robin (DB,JE,CJ,DCT,PT,NDW) [751-42] Photos CJ