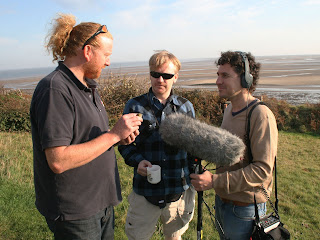 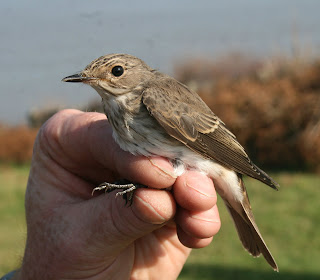 The chairman was interviewed by representatives of radio 3 for a forthcoming programme about the Dee estuary (above), and showed the work of the observatory and the bird ringing while they enjoyed a cup of tea ! It was a beautiful day in the sunshine and as the wind dropped it became very warm indeed. Signs were not good after dawn when only a single Chiffchaff and a Wheatear seemed to be present but it was one of those days when birds trickled in throughout the day. Chiffchaffs reached 12 by the middle of the afternoon, meanwhile a female Blackcap arrived in the morning and later a new Blackbird and the only Goldcrest were found. The star migrant arrived in the afternoon when a Spotted Flycatcher was found in the Newton trap (above right). This must surely be one of the latest ever seen on Hilbre, and is certainly the latest of the over 180 of these birds ringed on the island over the last 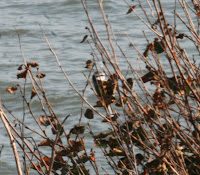 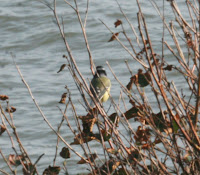 54 years. Just as rare or even rarer on Hilbre is Blue Tit and we were privileged to see one arrive in the obs garden, land on a bush by the fence and immediately take off again to the south (left). Another scarce Hilbre bird was a Lapwing which was briefly by the east side soon after dawn but flew off to the east. Other birds on todays log were 6 Wheatears ( at least one of which has been present for 2 days), 6,000 oystercatchers, 3,000 Knot, 3 Wigeon, 7 Guillemots, 5 Razorbills, 6 Common Scoter, 4 Great Crested Grebes, 1 Red-throated Diver, 2 Sandwich Terns, 8 Pied Wagtails, a Skylark and a Pergrine that gave a good show chasing the knot at the tide edge. The fine weather seemed to bring out the worst in the 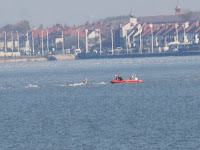 visitors to the estuary and the silly season was definitely in full swing today. Visitors were stranded on Middle, but thankfully did not disturb the wader roost, but that could not be said for the four people and 14 dogs ! that decided it was a good idea to stay the very high tide on Little Eye despite requests for them not to do so. Bad enough as this was, and it meant the waders had less roosting options, at least their lives were not in danger unlike the couple who stayed on bird rock and had to be rescued by the inshore lifeboat as the waves lapped about their feet (right). Thinking we had now seen everything, 2 canoeists disturbed the huge roost on Middle much to the annoyance of the obs members, and then to finish off the alarms a visitor decided to have a swim off the south of the main island as the tide ebbed and was lucky to be 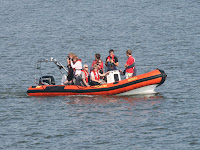 able to recover the south cove and not be taken out to sea. We are supposed to be here to record birds ! On a more sane note the boat showing the paying visitors around the area (left) did not disturb 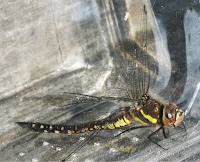 anything, but the representative present was fully aware of the drama going on all about. Back to the natural history, 4 Common Darter dragonflies were noted, along with 2 Migrant Hawkers (right, briefly detained for identification purposes), also a few Red Admiral butterflies graced the island. Ringed :- 8 Chiffchaffs,1 Goldcrest, 1 Wren, 1 Blackcap, 1 Blackbird, 1 Spotted Flycatcher.(DB,AEH,CJ,KMc+1,CJW) [849-43] photos CJ
Posted by Colin at 16:51