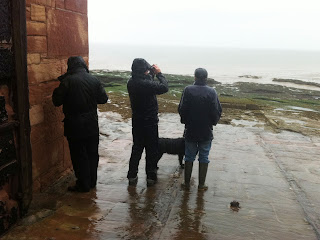 Many of the large contingent of members present today spent most of the morning trying to keep themselves and their optics dry. Before the rain started a Sparrowhawk flew down the west side scattering the waders between the islands. A few Swallows took advantage of the brief interludes in the precipitation to move through and 2 Chiffchaffs and a Willow Warbler were found in the paddocks but none of the larger warblers showed during the morning. A Wheatear arrived in off the sea at 11.00hrs and sat on the north end slipway for a while looking as though it was not sure where it was at the same time a Curlew 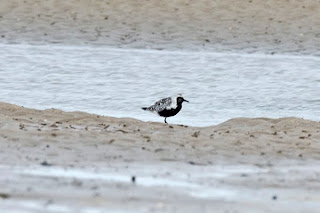 Sandpiper was seen flying with a group of Knot up the east gutter but conditions were not good for re-finding it immediately. Two Wigeon flew across the south end giving a touch of late autumn to the day. The first Grey Plovers of the autumn were found south of Middle Eye early in the day, they were in stunning summer plumage (right). Bar-tailed Godwits were counted at 14, and 2 Redshanks were in the east gutter after being so scarce in the last few weeks. Ringed :-2 Chiffchaffs, 1 Willow Warbler.
(JE,CJ+VB,DCT,PT+VT,AS,CJW,NDW,PSW,SRW,AW) [754-42] photos SRW & PSW