With the wind dropping overnight, turning east south east and with early morning mist burning off during the day, today was a great day on the island.  It started early with the arrival of a Redstart and a few Willows not long after dawn.

However, it was apparent that a moderate fall was occurring with Willow Warblers singing from most available bushes.  At least 65 were recorded with 39 caught and ringed.

Overhead passage was limited but it was quality and felt a bit like early May of old with 7 Yellow Wagtails, 3 Tree Pipits and amongst a small passage of Swallows (105), 3 House Martins passed over at high tide.

Around 950am one observer leaving the island (DB) had the bird of the day which was heard and seen flying high west over the island being mobbed by Crows - a Chough (the first record at Hilbre since March 1980 and only the fourth ever record). Unfortunately for those present it could not be found from the island.

A small consolation for those who missed the Chough was the first Sedge Warbler heard singing in the lower trapping area around noon; it was subsequently found in the SK trap. 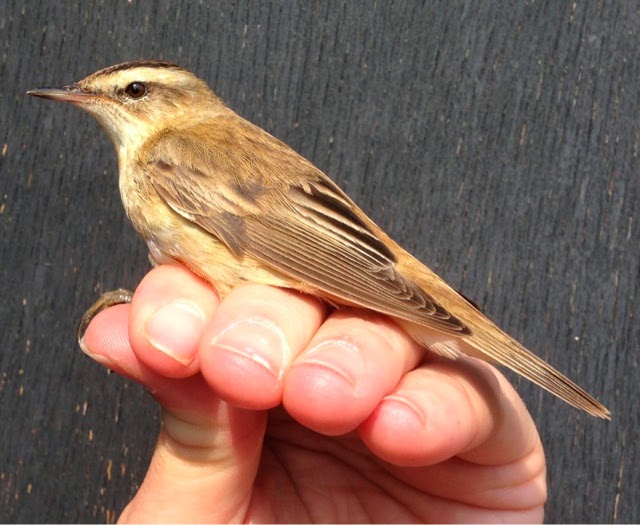 Dunlin (1,500) and Ringed Plover (85) were much in evidence as the tide flooded and Whimbrel moved about the islands during the day with at least 5 seen/heard.  Good numbers (156) Sandwich Terns were counted but little attention was given to the sea until ebb tide with the odd new Willow Warbler still being caught in the afternoon.

Off island a stunning drake Velvet Scoter was found off Meols and was still present this evening on the sand off Dove Point (see www.lighthousebirding.blogspot.co.uk for details and superb photos).