The day started slowly with a couple of phylloscs around the trapping area, however it felt good and things picked up as warblers drifted in during the morning.  A Whitethroat was heard singing and was then caught and yet another Redstart (a fine 2nd yr male) was caught in the Newton.

A couple of Yellow Wagtails dropped in and the odd House Martin flew through but there was generally very little vis mig (eg a single Redpoll) however 5 Woodpigeon appeared from nowhere after the mist briefly enveloped the island.

Mid morning and an unusual sounding Chiffchaff attracted the attention of one Obs member and the local Meadow Pipits with some aspects of an Iberian-like song. It was chased by the pipits up onto the mast where it sang briefly before disappearing.

Whilst looking for the Chiffchaff a bird was disturbed from the east side garden of Telegraph House - a small bird with white outertail feathers flew up from the floor and alighted in a tree in front of the 'Heli' trap. Obviously a bunting-type bird observers were looking into the sun, as they moved around to get a better view the obvious chestnut patterning on the head was visible and the size became more apparent when a Mipit and Willow Warbler joined it in the tree. 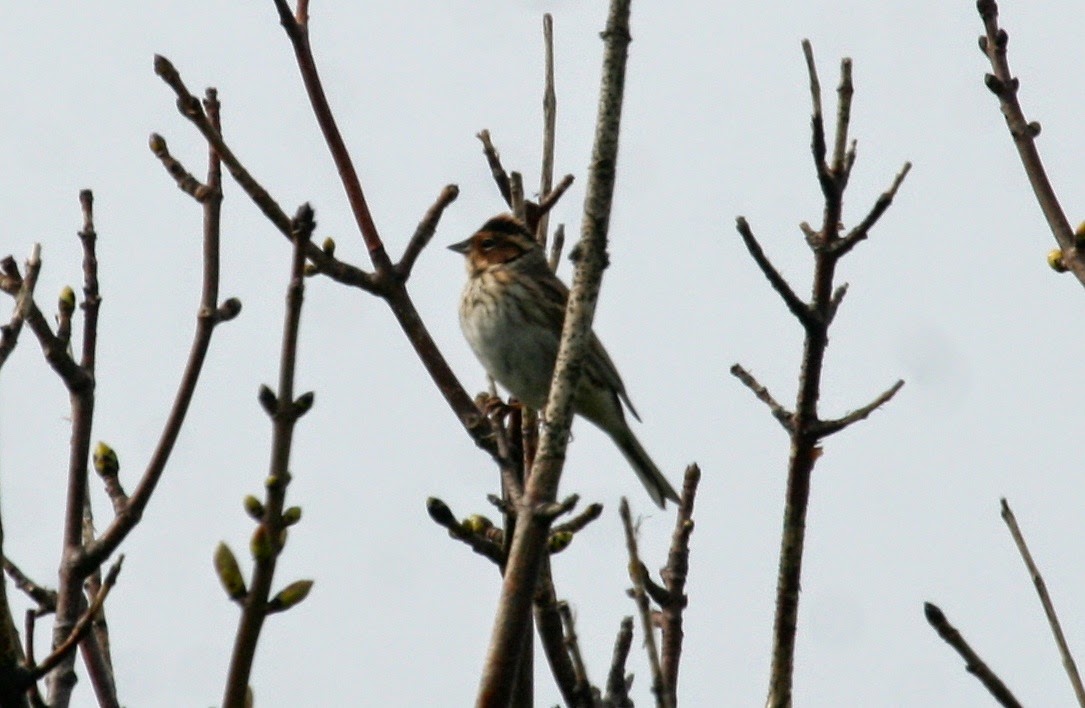 By now suspecting it was a Little Bunting remarkably the bird began to sing!  After a short time it moved to the top of the tree and then flew over the observers heads 'ticking' as it went! 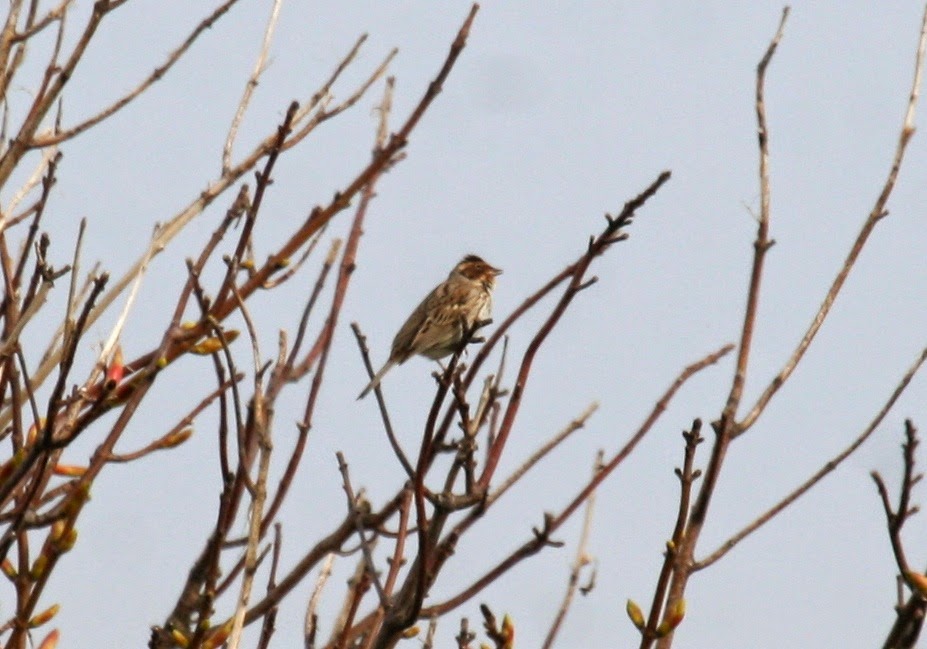 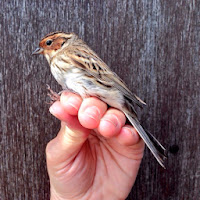 Still in a state of shock the observers refound it in the top of the trees in the Old Obs garden but after a brief foray into the bracken it disappeared. After a short while the observers approached the garden looking for the bunting but it did not materialise from the bracken - it had already caught itself in the mist net.

It was taken back to the Obs to be ringed, measured and photographed. 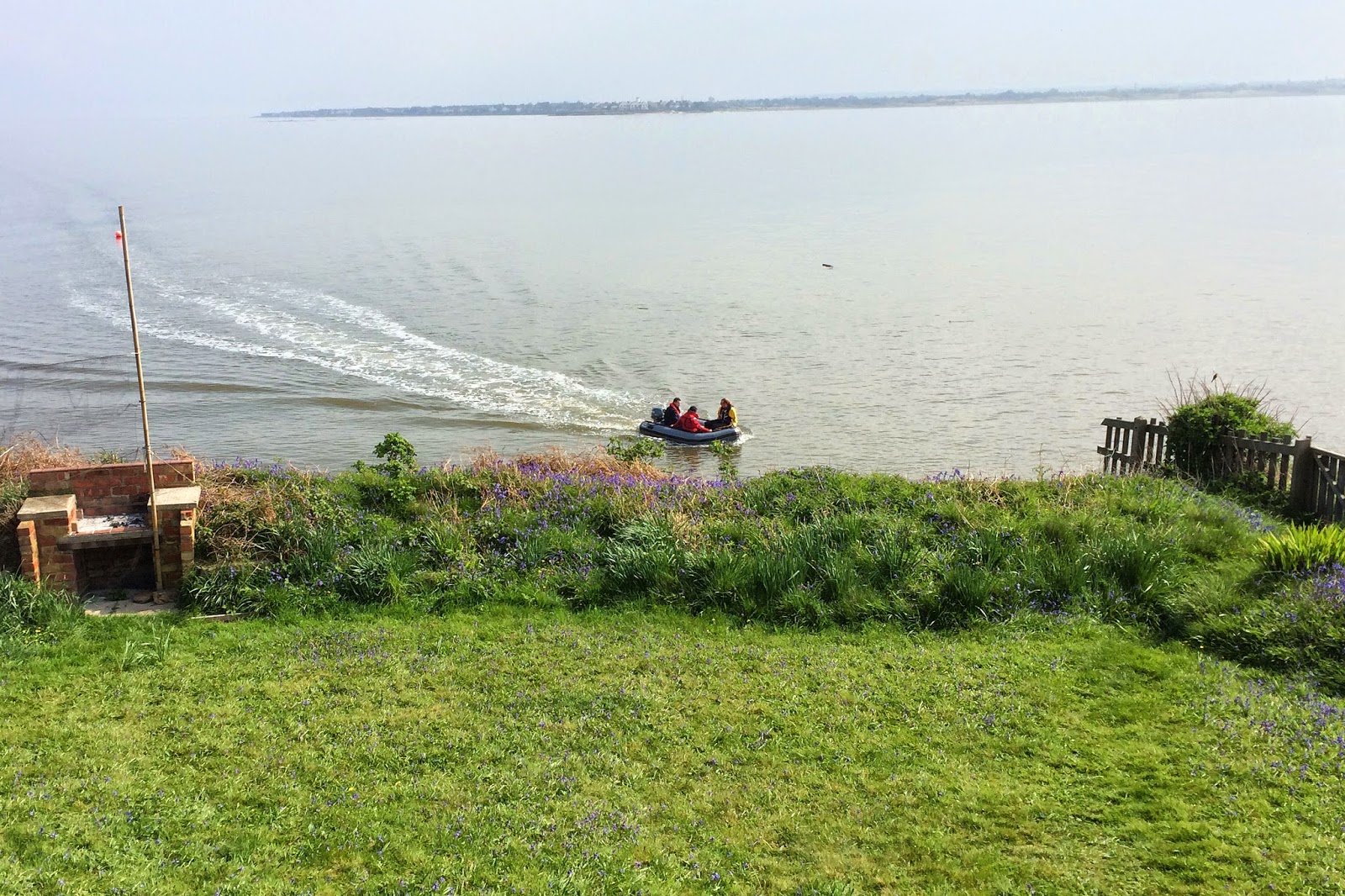 The rest as they say is history... but it also produced the first "boat twitch" to the island as the Chairman and another (CJW and AMC) who were conveniently placed near Hoylake Lifeboat Station (as usual!) managed to get a mini-rib over to the island (see right) to see the bird. 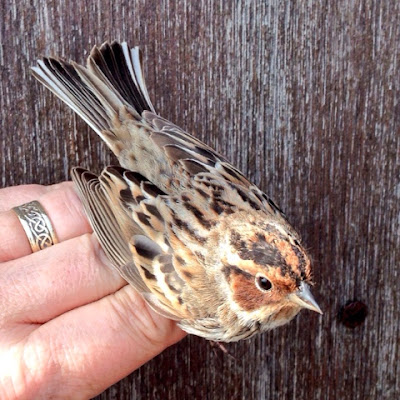 After release the bird was left alone for an hour or so before a brief search produced nothing.  However, a couple of hours later (as the tide ebbed) a more thorough search revealed it to have found the West Side grassy areas rather attractive and it remained in this area between the pond and the mast for much of the afternoon and evening allowing many visitors to see this superb first record for Hilbre (birders arriving and watching the bird from the mast). 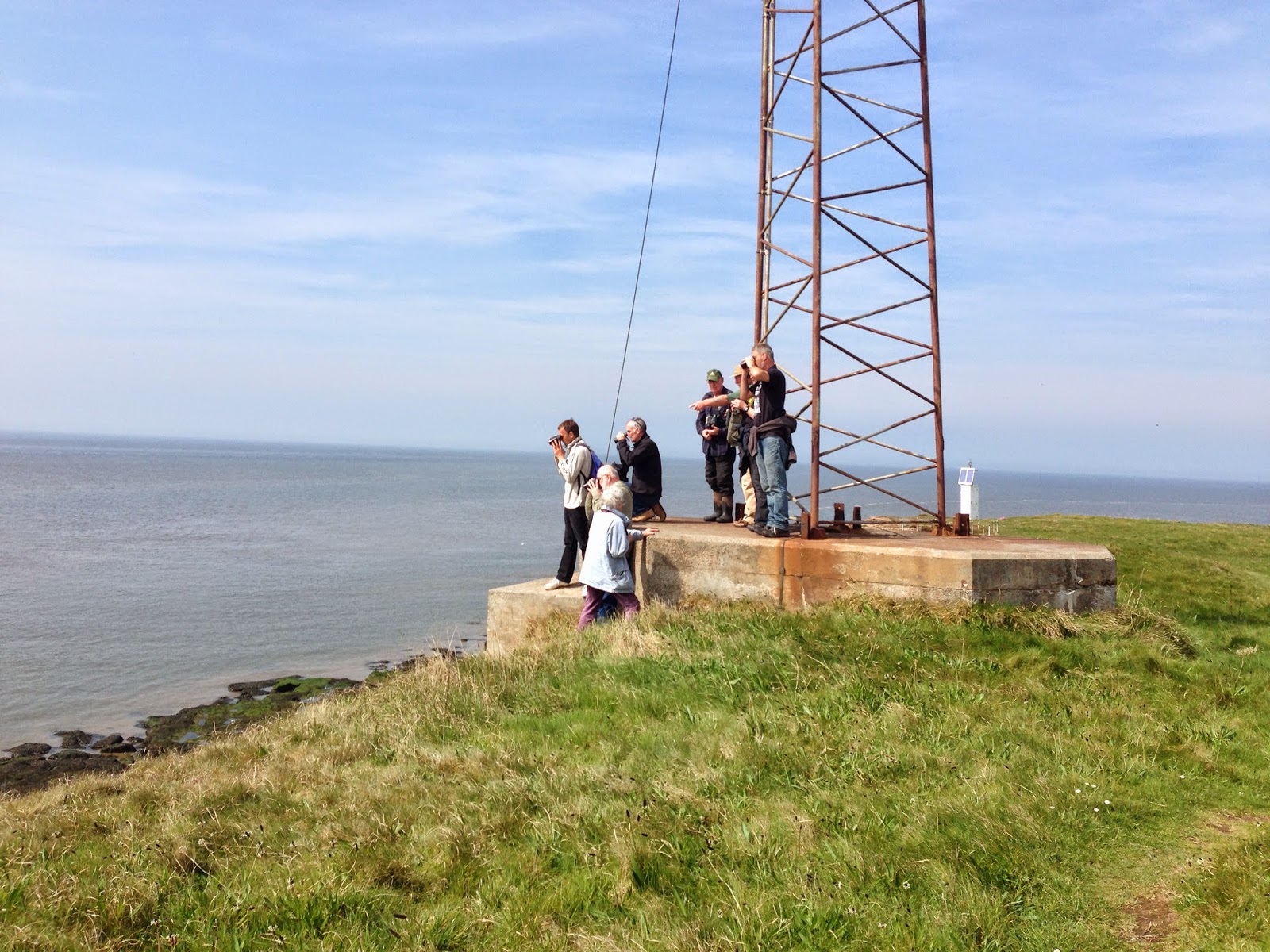 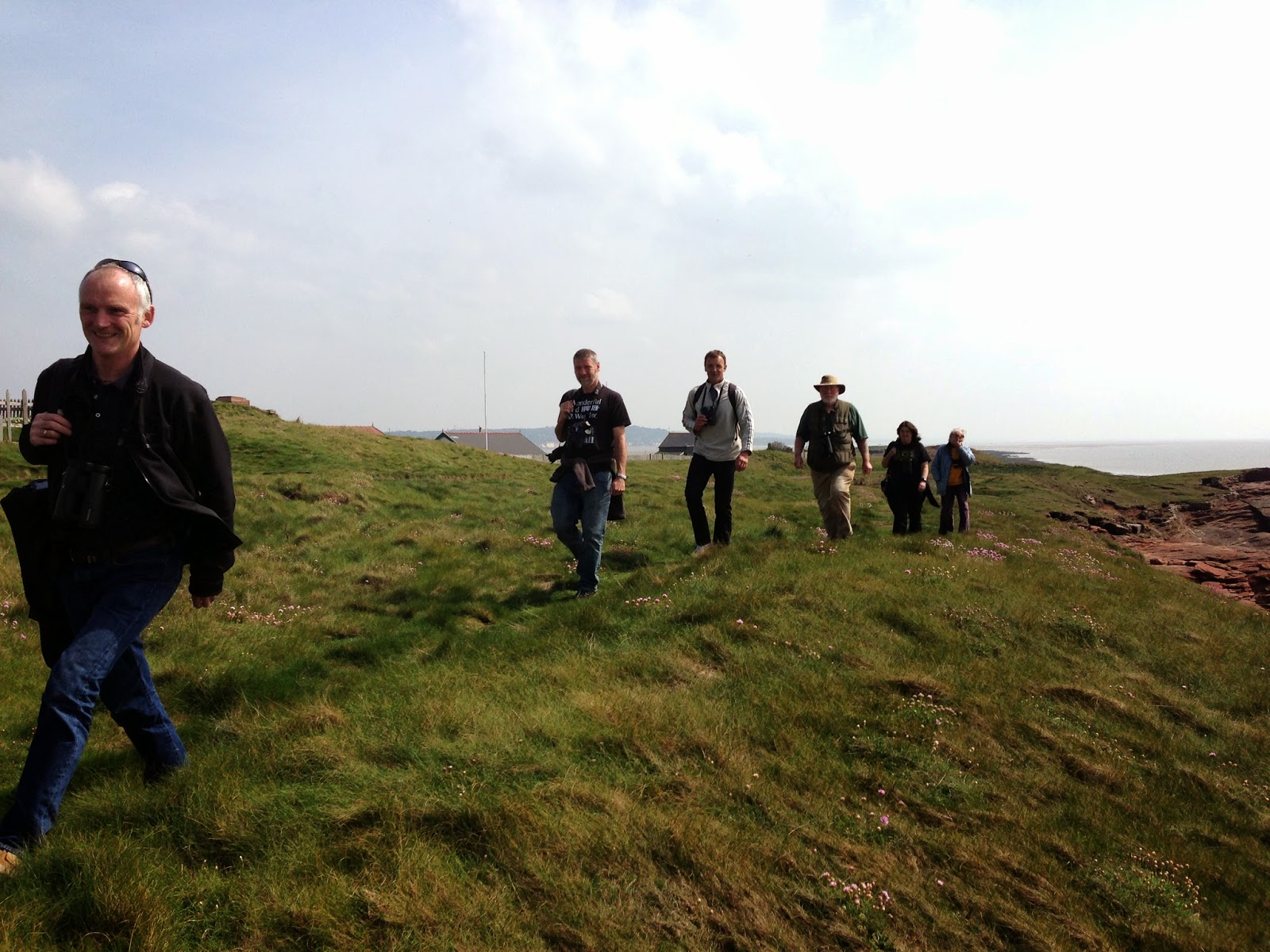 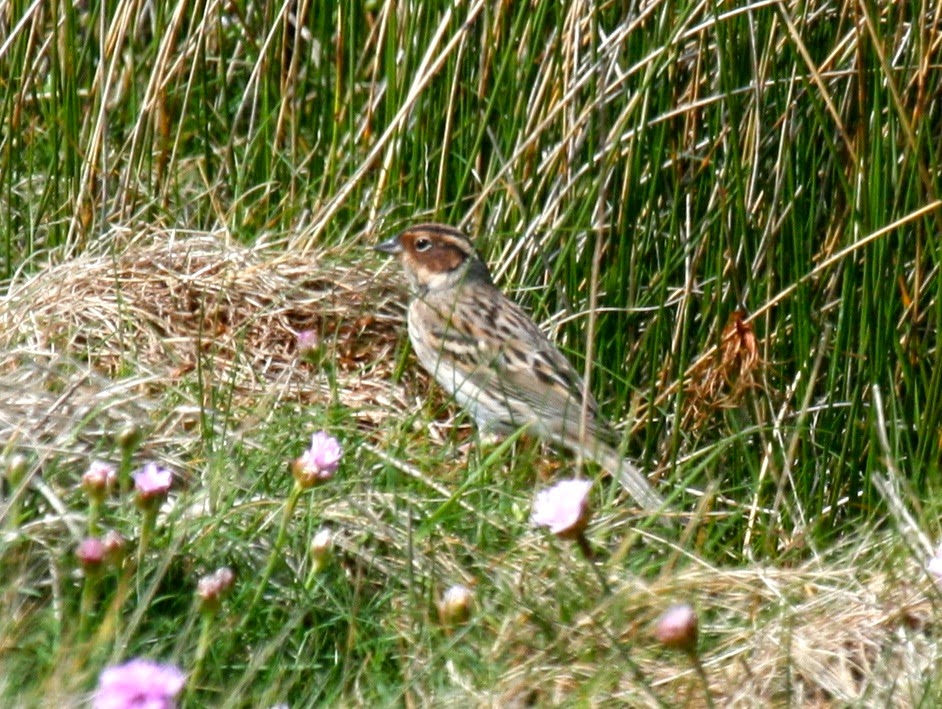 Sadly the Chiffchaff from earlier was never seen, heard or caught subsequently - but it was also forgotten in the excitement of the bunting.