Weather:- SE 3/4, showery rain during the morning
There was very little mist this morning and the south easterly was associated more with low pressure to the south west bringing air from the Atlantic rather than from the continent, so it was no great surprise that there was no large movement of Meadow Pipits etc today. Recent stalwarts Woodpigeon and Canada Goose made single appearances, there were some Linnets going through and 4 White Wagtails came down at the north end, followed later by another. 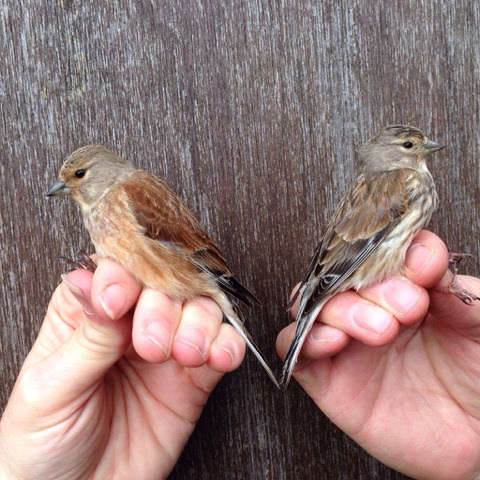 Four Goldfinches arrived as did 2 new Wheatears to join a bird from yesterday, but initially no warblers at all until a shower of rain mid-morning brought down 2 Chiffchaffs into the SK trap. Late morning a Swallow flew in off the sea at the north end and floated down the west side. Only about 50 Brent were seen, there may be more, but 2 Dark-bellied individuals stayed together at the tide edge.
Ringed:- 5 Linnets, 2 Chiffchaffs, 1 Robin, 1 Wren, 1 Meadow Pipit, 1 Goldfinch.  [ 140-19 ]
(CJ,SRW)
Posted by Colin at 14:54