A beautiful spring morning greeted observers as they travelled across to the island for the WeBs count. Overhead spring passage was evident immediately with two alba wagtails flying parallel to Middle Eye and heading south down the estuary. Skylarks, Chaffinch, Grey Wagtail were also logged. A Stonechat was found at the south end of Hilbre and later relocated to Middle Eye. A pile of Pheasant feathers found near the north end suggested a Pheasant had been disturbed by the ongoing scrub clearance at nearby Red Rocks and had made it across to Hilbre and attacked by something. Meadow Pipits were displaying and the resident Rock Pipits were chasing each other round the north end. The early morning mist resulted in a few birds being grounded with the first Goldcrest of the year trapped and ringed followed by new Robins,  Dunnock, Song Thrush, Blackbird and star bird – Redwing! 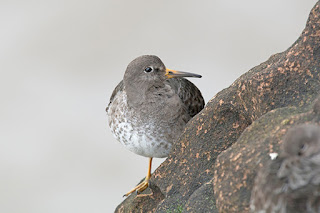 A male Eider was seen along the west side and two Velvet Scoters were picked up in flight from the north end. Only four Red-throated Divers were recorded with one in full summer plumage.
Six Purple Sandpipers roosted over the high tide on the west side (left) but unfortunately other roosting waders were disturbed by sea kayakers landing on the south end at high tide and then disturbing all the roosting birds on Middle Eye.
The Obs hosted a visit by a Salford University wildlife group who were given a talk on our work and were shown a Robin being ringed.