Weather: SW force 3, sunshine, cool
The first multiple arrival of Wheatears occurred this morning which was well overdue. At least 2 of the 6 birds were females, which in itself is unusual for the early comers to the island. The pale looking Merlin was sheltering amongst the rocks on the ridge south of Middle where a Skylark rose from the grass and the first Wheatear of the day was on the pathway. 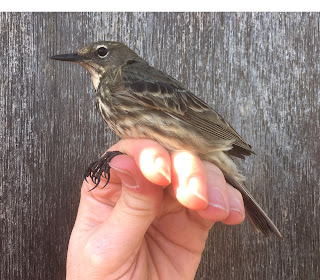 A Goldcrest and 2 Chiffchaffs were already present before the other Wheatears arrived mid-morning but they moved through quickly and the only other movement involved about 50 Meadow Pipits, 3 Pied Wagtails, 5 Goldfinches and a Greenfinch. At midday a Stonechat was found at the south end of the main island. One of the Rock Pipits present (right,CJ) was retrapped this morning adding to our knowledge of these birds which we hope will breed again this year.
The Weasel was seen to take several swimming excursions into the main pond, undoubtedly the same creature as has been around for the last few months.

At 1255hrs a Spoonbill was seen flying past Middle Eye (AAB) and is our fourth record ever but the earliest of all four Spring records.  Photo below (by BT) is of the last bird (an immature) on 13 April 2012.