Weather: SSE force 1/2  light rain early
Still very cool for this late in the spring but at least we had a south easterly. A few Willow Warblers were grounded as expected, also as many Wrens (slightly less expected). Three overhead flava (yellow type) wagtails were welcome as they were well overdue, but Redstart and all the large warblers have been still refusing to show entirely at Hilbre so far this year, until now that is, when a Lesser Whitethroat was caught for ringing in the SK trap at 14.20 this afternoon (below, KMc). 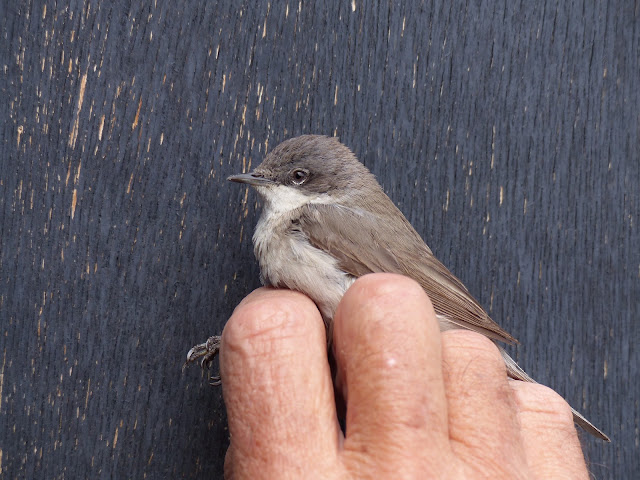 We hope this scarce warbler for Hilbre which set the seal on a better ringing day than of late is a sign that things have changed for the rest of the spring. Early this morning a very late Whooper Swan flew east over the islands and a Reed Bunting flew south over Middle. 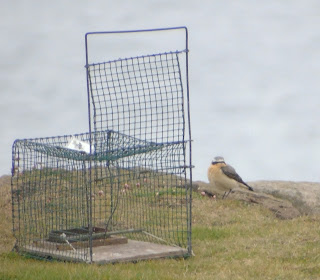 Three Wheatears were on the island but all seemed to avoid ringing (right, JE), 5 Skylarks flew west, a single Redpoll called overhead while 2 Sand Martins tracked south down the west side, with 6 more showing in the afternoon with about a dozen Swallows. Twenty seven Whimbrel were counted today at this peak time of their passage.

Two Peregrines fought in the air above the island for an item of prey, probably a small wader, and later in the afternoon a Merlin was logged. A Harbour Porpoise swam north out of the Dee at 09.40, only 2 hours after low tide. A sea watch around high tide produced a Fulmar (scarce lately) 10 Gannets, 5 Guillemots, 1 Merganser and 300 Sandwich Terns, also the large number of Dunlin were not diminished today  with 6,000 around the island. The slightly warmer weather this afternoon encouraged a large White and a Green-veined White butterfly to take to the air.
Ringing: 5 Willow Warblers, 5 Wrens, 1 Lesser Whitethroat, 4 Linnets, 1 Meadow Pipit, 1 Robin.      [ 125-20 ]