Weather: Light air, -1 with frost
Best bird of a cold early morning was a drake Scaup seen off the north end for a few minutes, at the smae time 500 Common Scoter were moving at a distance. A small number of Redwings were heard overhead, but no migrants down, just 3 Song Thrushes, 8 Wrens and 2 Robins all which may or may or may not be about to winter on the island. A Skylark, 2 Starlings and a couple of Pied Wagtails were logged while passing. The Magpie still finds enough to sustain itself in the early winter.
Amongst the 238 Brent seen were 4 colour ringed birds. Knot formed a flock of 200 at the north end. 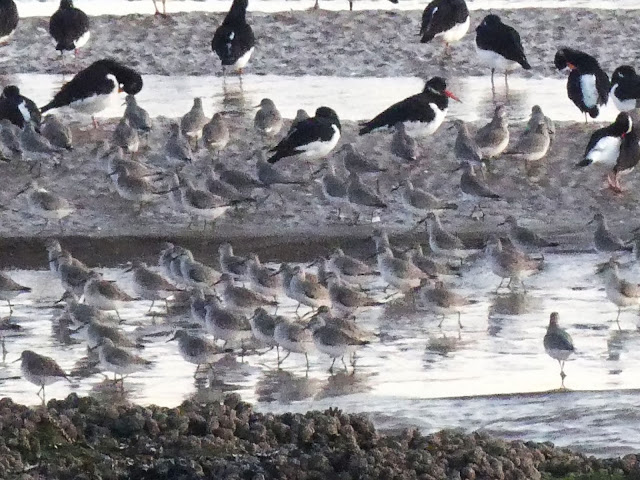 A Peregrine chased a Knot and was joined by another pair in the pursuit over the shore. There were 400 Dunlin, also 6 Bar-tailed Godwit, 5 Grey Plover, 10 Sanderling, then 6 Purple Sandpipers and a Teal in the gutter on the ebb tide. Also on the ebb a single Little Egret, the first of the day and 2 Grey Herons.
Ringed: 1 Song Thrush    [ 769-36 ]
photo CJ
Posted by Colin Jones at 15:00