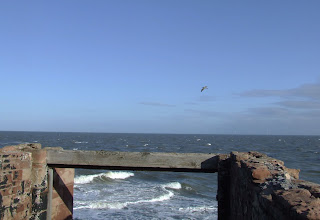 With the wind still in the north west there was again no passerine interest (apart from 2 Skylarks) and the best bird watching took place while viewing from the sea hide (left).
A Little Gull fed distantly with fluttering flight off to the west, and 3 Scaup flew from the Hoylake direction, quite close to the island and then towards Wales. After the tide a second winter Mediterranean Gull was identified with the other gulls around the north end and a Harbour Porpoise was watched for about twenty minutes and shortly afterwards it was seen moving towards the island to give close views for a short time. Some of the other seabirds from the log were :- 4 Gannets, 2 Red-throated Divers, 11 Great Crested Grebes, 65 Common Scoters and the Velvet Scoter.
All three of the island ponds now contain frogspawn and it won't be long before we can look forward to the appearance of all the other pond creatures.
(JE, CS+1,) +SH photo JE
Posted by Colin at 11:44