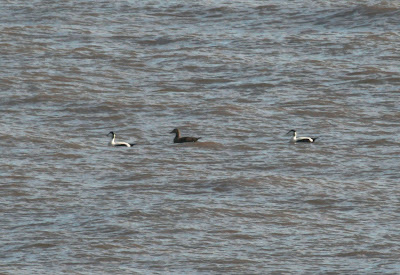 Two drakes and a female Eider (right) off the east side were the best of the action on the sea, indeed the sea was otherwise remarkably quiet with no divers, grebes or scoters to be seen all day, just a male and a female Red-breasted Merganser.
A beautiful sunny day and with spring just around the corner slightly unusual species are appearing in small numbers; today 2 Canada geese, a Lapwing and a Wood pigeon were noted and over the island were 5 Skylarks, 2 Goldfinches and a Greenfinch.
At noon 11 Purple Sandpipers were counted in Niffy bay although other small waders apart from the Turnstones were at a premium; 7 Sanderling, 25 Ringed Plover, 12 Dunlin and 85 Knot. On Middle an estimated 10,000 Oystercatchers sought refuge from the highest tide of the year while on the ebb tide 6,000 Herring Gulls were seen towards the north and east of the island either resting on the sea, bird rock or the north shore beach. 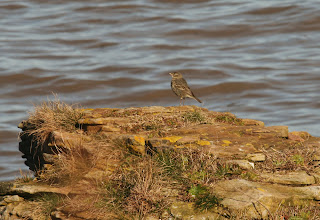 The usual wintering passerines were seen including 3 Dunnocks (1 or 2 in song), 3 Rock Pipits (left), 4 Song Thrushes and 3 Blackbirds.

Another precursor of spring , the Lesser Celandine (right) has been flowering for some weeks now despite the continuing cold.
(DB,CJ,CJW, et al) photos CJ
Posted by Colin at 17:11