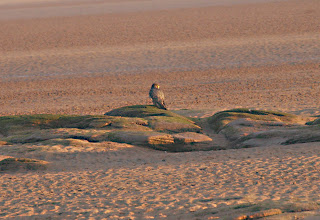 A Peregrine sat on the rocks near Little Eye in the early morning light, unfortunately the breeze proved to be in the north or north west rather than the north easterly promised by the forecast, but nevertheless although there was no true migration there were small signs of spring movement.
The first Gannets of the year were logged and a total of 16 were counted, mostly at a good distance from the island. A drake Eider flew south west down the estuary and another was off to the north, which was later joined by 2 more drakes - making four for the day. The Velvet Scoter was eventually located even further out than usual, beyond the 12 Great Crested Grebes and 5 Red-breasted Mergansers. A single Red-throated Diver and 30 Common Scoters completed the sea-watch.

A Common Snipe was flushed from the main pond early in the day which was later occupied by 4 Mallards (left). A flight of 6 Jackdaws (right) (a scarce Hilbre bird) flew lazily west over the island.
Three Pied Wagtails went over, otherwise migrant passerines consisted only of finches with 4 Greenfinches (2 down around the Blackthorn) and 12 Goldfinches overhead.
(DB,CJ,CJW, et al) photos CJ
Posted by Colin at 11:04