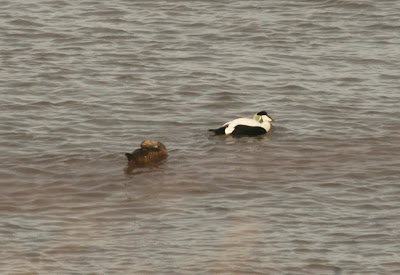 A light south easterly gave hope of a reasonable days birding and it seemed to be delivering with a Merlin flushed from the south end of the main island and 3 Eiders close in to the west side (left). The trapping areas held 3 new Robins, hardly a passage but they were the first non-thrushes ringed this year. Seven Pied Wagtails went through and 2 Chaffinches were down briefly and together with the single Skylark that was the extent of the days passerine movements.
Eight large swans flew north out of the Dee but were too distant to identify specifically but were probably Whoopers.
A count of 282 Turnstones was certainly up on recent weeks and our wintering flock may have been joined by others arriving from elsewhere preparing to depart to the breeding places. At least 12 Purple Sandpipers are still with us. 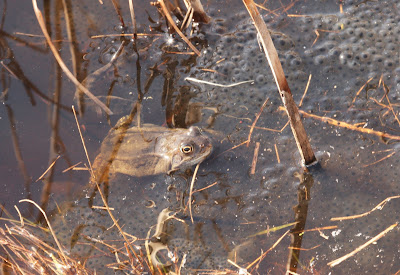 The sea was quiet with records of 10 Great Crested Grebes, 10 Red-breasted Mergansers, a single Red-throated Diver and the Velvet Scoter making a very brief appearance when seen (unfortunately from the obs) to fly closely passed the north end.
The frogs together with their spawn are now both showing well on the track side of the main pond (right).
Ringed :- 3 Robins
(DB,CJ,KMc) +RW [27] photos CJ
Posted by Colin at 17:07

would I be right in thinking you had the porp from about 10.45 on Sunday?
Your long staying velvet scoter is making me both jealous and twitchy!

Hi Dave,
Yes that would be about right for the porpoise. If you decide you want to come for the Velvet Scoter, make sure you bring a scope with you, have you noticed the lack of photographs ?
best Wishes
colin