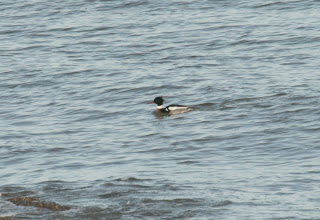 hoping to see the first in the local area but efforts were in vain and visible migration was at a standstill due to the light north westerly airflow. A single 'alba' wagtail overhead could have been the first 'white' of the spring but views and call were insufficient to establish it. Sea birds were few and distant but at least some were present with 15 Red-breasted Mergansers (left) and 8 Great Crested Grebes counted. The Velvet Scoter kept its usual distance to the north and east of the islands but the 70 Common Scoters flying about were even further away.
(CJ,NDW,SRW,CJW,TGW) photo CJ
Posted by Colin at 10:09