Not as much movement today with only 22 Meadow Pipits through but a few interesting birds to note. 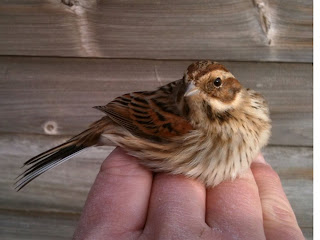 Little Gulls continue to show off the west side (70 today). The Brent are down in numbers from the peak although there were 2 dark-bellied amongst the 110 birds counted. A pair of Wigeon were seen again, possibly the same as yesterday.
Three Magpies were observed in flight over the east hoyle bank.
Two male Wheatears and a single White Wagtail were on the island but the best passerine was a female Reed Bunting (right) which was caught and ringed. (DB,CJW) [29] Photo CJW
Posted by Colin at 08:44