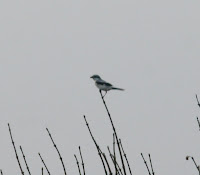 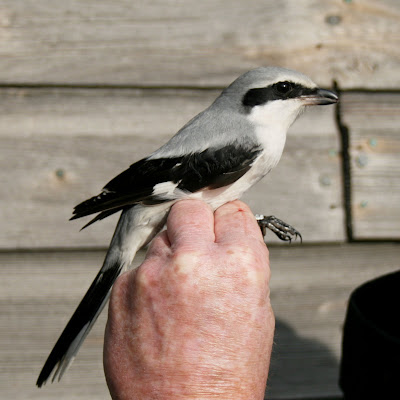 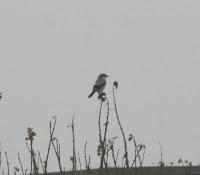 Today was the sort of day that makes all the days tramping around the island with little reward worthwhile. At 08.15hrs a Great Grey Shrike (top 3 pictures and flying below right) was seen sitting on top of the sycamores in the old obs garden, it visited most of the perches available on the island (including the top of the new obs mist net pole) during the next 2 hours until it returned to where it was originally seen and found itself in 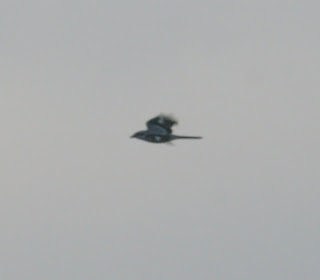 the mist net in the old obs garden. This is the third record for Hilbre although the others have been fly-overs and not birds on the ground. A few members and others managed to make it across to see the bird before the tide came in, although it was still present until at least 12.30hrs at which time the island was inaccessible.
Earlier 2 Lapland Buntings flew down the island and landed briefly by the south end but unfortunately they did not stay. 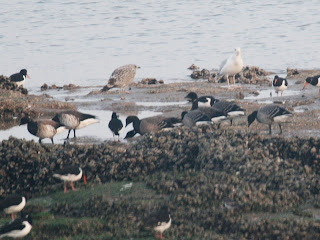 The first flock of eight Brent Geese (left) had arrived overnight and they included at 4 young birds which seems to indicate a good breeding season. Another flock of eight birds,this time Greenfinches were on the feeder in the 'heli' trap and were all released together after ringing (below). This many Greenfinches have not been captured on Hilbre for many years !
Another scarce species for Hilbre was logged when 2 Great Spotted Woodpeckers were around the paddocks, although the first half of October seems to be invariably the time they arrive.
Other highlights included a Greenshank in the east gutter, 6 House Sparrows down near the 'heli' trap, 3 Redwings, a Stock Dove, and a male Blackcap. There was a definite passage of Robins with 11 new birds ringed today, while other movers were 105 Meadow Pipits, 61 Starlings, 2 Skylarks, 30 Goldfinches, 3 Song Thrushes, a Siskin, a Chaffinch, 2 Goldcrests, 13 Pied Wagtails, a Grey Wagtail and a Chiffchaff. Late migrants were 8 Swallows and 3 Wheatears.
Later during the high tide 5 Wigeon, 4 Little Egrets and 5 Great Crested Grebes were recorded.
Ringed:-1 Great Grey Shrike, 8 Greenfinches, 11 Robins, 2 Goldcrests, 2 Chiffchaffs, 1 Song Thrush, 1 Dunnock, 1 Blackcap.
(AAB,DB,CJ,KMc,CJW,et al) [637] photos CJ
Posted by Colin at 13:15