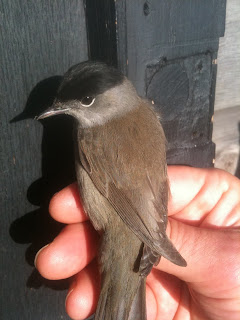 from, it was once more demonstrated by the capture of a male Blackcap today bearing a dutch ring (right). This follows on from the Blackbirds from the continent trapped last autumn. All the more surprising as the Blackcap and a female Blackbird were the only birds captured today. The Blackcap yesterday was not ringed and therefore a different bird.
Five juvenile/female Eiders were by Little Eye later and 2 Whooper Swans (the first of the autumn seen from Hilbre) flew south/south west.
A good number of Meadow Pipits were noted today with a single Redwing and 2 Skylarks but few other passerines. An accurate count of the Turnstones revealed 112 birds but only 37 Brent could be found.
The resident rabbit showed itself once more today.
Ringed :- 1 Blackbird
(DB,CJW) [673] photo CJW
Posted by Colin at 14:44