Gentle easterlies with some coastal mist greeted the observers this morning and during the first hour or so there was some movement of Blackbirds, (below, 24 in total), with 2 Song Thrushes, but slightly surprisingly given the conditions, no Redwings. Overhead were 5 Brambling and 5 Siskin and a scattering of other finches (including a Greenfinch on the garden feeder, bottom right)), also 49 Starlings, 3 Skylarks, 65 Linnets, about 50 Meadow Pipits and a House Sparrow. 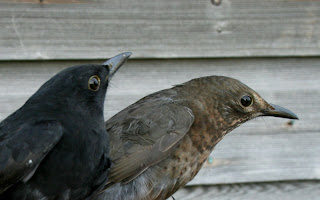 At 10.30hrs a Firecrest was trapped in the old obs garden, the third Firecrest of the autumn for Hilbre, but unlike the last bird this time it typically appeared without any Goldcrests being on the island. 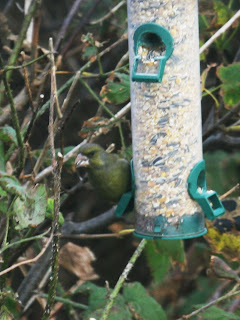 Two Rock Pipits were still about, one of which was retrapped today and seems to be in fine condition (left).
There were no surprises on the sea watch, just counts of the usual species:- 6 Red-throated Divers, 28 Great Crested Grebes, 2 Red-breasted Mergansers, 8 Guillemots, 2 Razorbills and a Common Scoter.
On the shore 106 Redshanks was the highest number for some time, others counted included 47 Bar-tailed Godwits, 3 Little Egrets and 5 Grey Herons.
Yesterday evening Seven Purple Sandpipers were found at the north end.
Ringed:- 5 Blackbirds, 1 Firecrest, 1 Meadow Pipit.
(DB+ESCA,JE,CJ,PSW,+SH) [680] photos CJ
Posted by Colin at 14:04