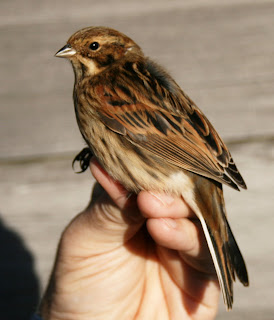 and Song Thrush and a few finches dropping in from time to time, also a Reed Bunting that was ringed later (right). Small flocks of Linnets and Meadows Pipits showed early on, 2 Siskin called overhead and a total of 32 Skylarks passed through, mostly travelling east low over the sea, also 4 Starlings that landed on the mast for a while.
The best birds of the day was a Black-throated Diver which flew past the north end at high tide (below), also the 2 Lapland Buntings that were flushed from Middle after the tide and 3 Scaup that were in the channel to the east of Little Eye also on the ebb.
Four Thousand Oystercatchers and many Curlew managed to roost the tide on Middle undisturbed by Peregrines or the several canoes and boats close to the islands. No sign of any Brents before or 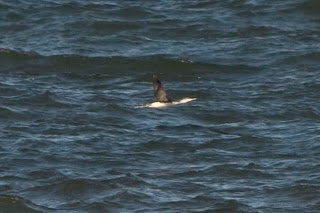 after the tide, just 2 Little Egrets with the waders on Middle.
In addition to the Black throated Diver the sea watch counted 14 Red-throated Divers and a number of Great Crested Grebes and Guillemots and 3 Common Scoter.
Ringed:- 2 Greenfinches, 1 Reed Bunting, 1 Wren.
(JE,CJ,PSW + SH) [672] photos CJ & PSW
Posted by Colin at 16:17