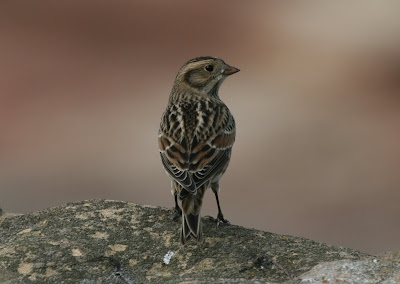 A very light south south east wind with clear skies produced another lovely day on the island...and the birds weren't bad either!

On the way over as the very low tide dropped slowly a small flock of four Shovelor flew up the gutter and off towards West Kirby (see right). A single Peregrine drifted down the ridge and at least four Little Egrets and five Grey Herons were present.

Visible movement was a little thin with a few pipits, Skylarks, the odd Starling and a few finches including a Brambling as well as a single Reed Bunting, however, 3 Greenfinches dropped in and were caught in the 'Heli' trap as well as a Linnet. A single female House Sparrow dropped in and toured the island before also being caught (see left). 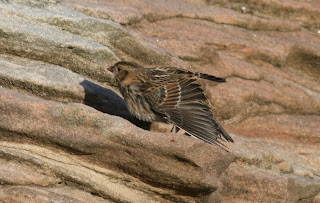 Grounded migrants included a few Goldcrests (one of which was caught in the Old Obs garden).
The obvious highlight of the day was another Lapland Bunting (or Longspur if you prefer) our sixth of the autumn. Today's bird was found at the North End (see right) in amongst a group of Meadow Pipits. It spent a while preening and dust bathing.
It then moved further south and was relocated by our 'potter' traps on Wheatear hill opposite the Observatory. It spent the next couple of hours feeding around the potters and on the nearby sandstone wall (see top and below) but unfortunately was not caught. However, it was successfully 'twitched' by two members from the mainland. 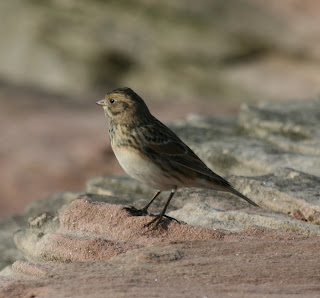 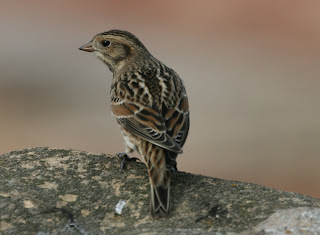