Things were much quieter today and is difficult not to be a little disappointed after some really fantastic days so far this week. The wind was still in the east but backed north east later in the morning making the air feel quite cool. Meadow Pipits and Linnets started slowly but both reached over 100 before noon, there were not too many Starlings although there was one flock of 50. Finches counted up to 11.00hrs only involved 4 Greenfinches and 2 Chaffinches; Robins went through again in small numbers, another late Wheatear appeared briefly before moving south and there were at least 5 Rock Pipits on the islands. No other passerines of note in the trapping areas, just a Goldcrest that was ringed yesterday. 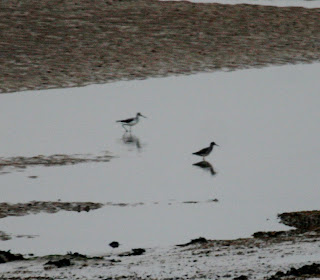 Probably the best bird of the day was a Greenshank feeding with Redshanks in the east gutter this morning (right, with redshank). The 9 Brent continued to move around the island, 130 Bar-tailed Godwits stayed by the tide line north of the east hoyle and at least 3 Guillemots were within binocular distance.
Later update - 66 Pink-footed Geese flew from Wales and went south down the Dee. A Reed Bunting arrived in the paddocks and there were good counts of 312 Sanderling and 680 Curlew.
Ringed:- 4 Robins, 1 Chaffinch, 2 Meadow Pipits.
(DB,JE,CJ,KMc,CJW et al) [660] photo CJ
Posted by Colin at 13:04