The wind today was lighter with a more easterly element and at first light in seemed there was no movement whatsoever but within 30 minutes or so it started to happen, not quite on the scale of yesterday, but nevertheless things were moving. Only about 100 Meadow Pipits passed in the first 2 hours but the hoped for Lapland Bunting was heard and seen as a single bird amongst a small flock of pipits going south at about 08.35hrs. Two flocks of 7 and 9 Redwings went through also 150 Starlings passed south low over the east side in a single flock and 14
Skylarks went across in small groups. Four Blackbirds were about the paddocks in the half light, 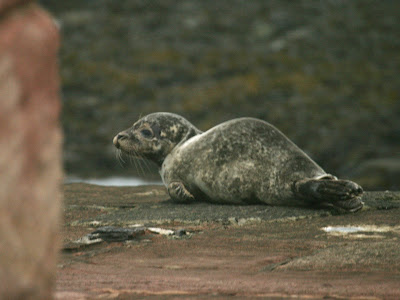 2 Chaffinchs and a Greenfinch was heard and 2 Grey Wagtails were identified apart from the few Pied that called overhead.
Two Teal flew into the tide edge off to the east side where 60 Bar-tailed Godwits fed.
The Common Seal reappeared resting on the lifeboat house slipway before being disturbed (right).
Later after the tide there were 2 more Blackbirds and a Greenland Wheatear.
Ringed:- 3 Blackbirds, 1 Chiffchaff.
(DB,AEH,CJ,CLW, SRW,TGW,CJW(f), GIW+JC) [595]
Posted by Colin at 11:29