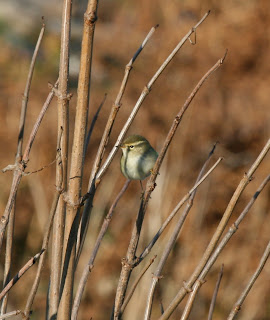 It was so good this morning, especially the appearance of the Redstart as the tide was rising, that one Obs member decided that an after-tide afternoon visit was in order. Arriving just after 3.30pm a quick tour of the island revealed Wheatear, 3 Rock Pipits, the Redstart and a fleeting glimpse of a phyllosc in the trapping area - presumably a Chiffy from earlier? 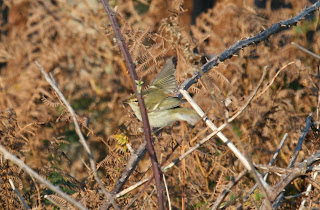 Back at the Obs enjoying the afternoon sun and moderating easterly breeze from the veranda - three Goldfinches alighted in the bushes in the garden and then another bird appeared at around 4.15pm in the brambles - a quick lift of the binoculars revealed a Yellow-browed Warbler! A couple of record shots (apologies for the quality) were taken as the bird flitted over the fence and around the 'new pond' for about five minutes.
Unfortunately it then promptly disappeared as numerous phonecalls were made and texts were sent.

Fortunately, a short time later (although it felt like longer) it reappeared in the Obs garden mist net. It was extracted ringed, photographed and released. In the meantime, a Chiffchaff was also caught which allowed the two birds to be photographed together. 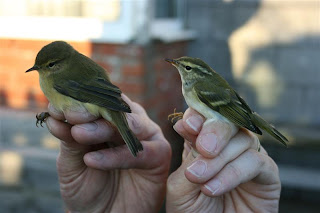 Finally, yet another Dunnock was trapped indicating a passage of this species through the island today.
(JE, CJ, CJW, NDW, SRW et al) Photos SRW [606]
Posted by Hilbre Steve at 21:02