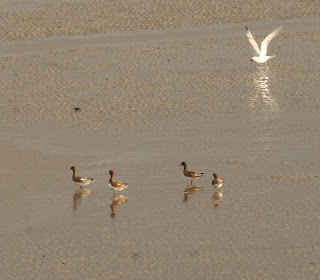 With the wind in the west expectations were not high and it turned out to be a reasonably quiet day with a few ducks, finches and other regular late autumn birds. 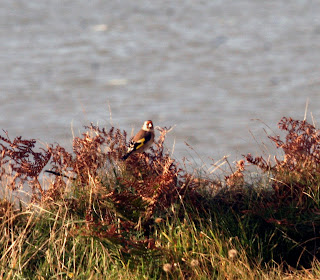 Early morning saw 54 Starlings on the mast where they possibly roosted, and 13 more flew low over the obs near to noon. A Skylark was heard overhead and then 3 went through low over the paddock.
Three Teal, 4 Pintail and then 16 Wigeon flew west and later 4 Wigeon landed on the east hoyle (above).
Two Greenfinches were around early and 3 Goldfinches (above) stayed some time but refused to be trapped. Goldfinches have been particularly scarce so far this autumn. 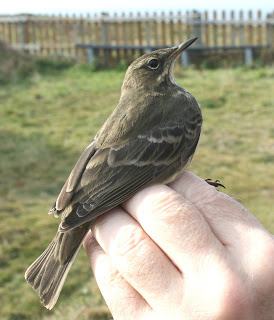 A flock of 300 Knot landed in the east gutter where again only 6 Brent were present.

Bird of the day must be an immature Pomarine Skua that passed the island this afternoon.

A splendid Rock Pipit (left) was captured in a potter trap at the north end. It is the first ringed at Hilbre since October 2007. October/November is the peak passage period for this species on the islands.
Ringed :- 1 Rock Pipit.