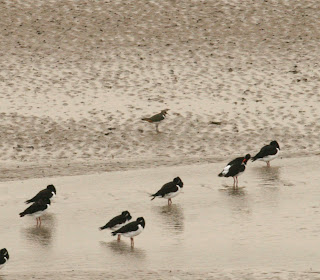 As expected the south easterly produced a slight improvement with a few different species present but still nothing like what could be called good visible migration. A Chaffinch spent all morning up and down the island and was later briefly joined by a Greenfinch and a flock of 20 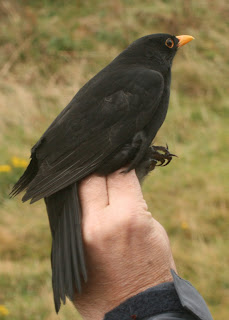 Linnets. A Reed Bunting called overhead first thing, a Skylark (below) was flushed by the west path and ten Starling flew over, while a Lapwing spent most of the morning by the east gutter with the Oystercatchers (above). 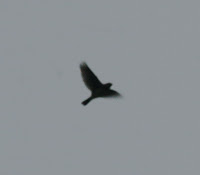 The only thrush was a grounded male Blackbird (right) and there was little other to note apart from a Rock Pipit at each end of the island. Just 6 Brent could be found, possibly the previous birds have moved on.
Ringed:- 1 Blackbird, 1 Wren.
(JE,CJ,CJW,PSW et al) [542] photos CJ
Posted by Colin at 12:19