A start just before dawn because of the early tide found a Chiffchaff singing in the twilight in the obs garden. It was not seen or heard again until it was found in the old obs mist net two hours 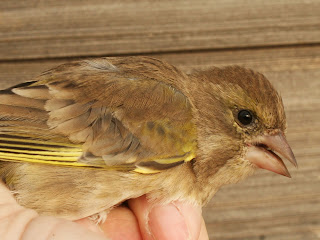 later. An even bigger surprise was a Greenfinch (below) quietly sitting in the same net and it became the first to be ringed this year. A Song Thrush and a Blackbird soon also received rings but a Redwing that landed on the 'air-raid shelter' was not so obliging (another was heard calling over in the dark before dawn).
Only 4 Skylarks today, but a total of 67 Starlings, 7 of which were feeding on the path in front of the telegraph station, and other passing visitors were 3 Goldfinches, 2 Greenfinches and a Grey Wagtail. 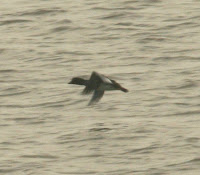 A female type Goldeneye (left) was on the sea briefly on the east side and then flew away between the islands, probably the same bird as was seen yesterday with some Mergansers. The same number of Brent as yesterday (10), and just 2 Great Crested Grebes and 5 Common Scoter on the sea. Ringed:- 1 Song Thrush, 1 Blackbird, 1 Chiffchaff, 1 Greenfinch, 1 Wren.
(CJ) [556] photos CJ
Posted by Colin at 14:12

Excellent Colin. Shame work prevented me getting over today. New daysheets printed ready to bring over.