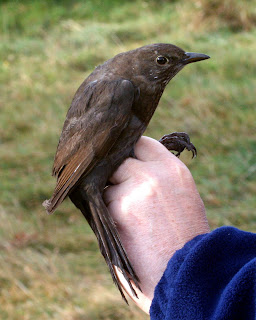 A light south easterly early morning brought the first Goldcrest since August with a single on middle, 5 Golden Plover travelling south, and on the main island the first thrushes of the autumn (3 blackbirds (right) and 3 Song Thrushes). One of the Blackbirds was ringed at Hilbre as a juvenile on 4th July last, and set heads scratching as to where it has been/going to in the meantime.

Two Grey Wagtails were noted, a Common Snipe was flushed off the west side path and a Black-tailed Godwit (above) flew with the Bar-tails off the east side. 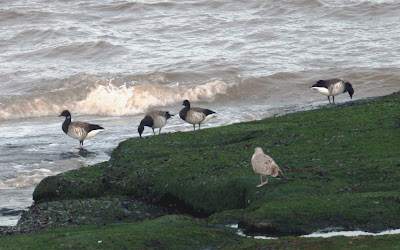 The 21 Brent included amongst the 3 new arrivals since Saturday the bird seen frequently with the flock last winter that was colour ringed in Dublin (bird extreme left).
A good count of 61 Linnets for the day after several flocks were noted.
After dark 3 Pipistrelle Bats were recorded with the detector half way across the east hoyle bank. this is significant as they were previously thought to arrive at Hilbre through the chain of islands from Little Eye.
Ringed :- 1 Blackbird, 1 Song Thrush
(DB,CJ et al) [535 ] photos CJ
Posted by Colin at 12:12