A slight improvement in visible migration this morning in what has generally so far been a poor autumn, made it worth while looking and listening overhead. Two groups of House Sparrows (a scarce Hilbre bird) were noted, the first were flyovers (left), but the second group of four landed and toured the island for some time (below). 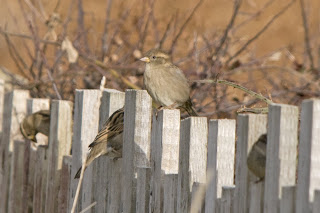 Two single Reed Buntings went through and finches also over were a Redpoll, 2 Goldfinch, 2 Greenfinch, and 40 Linnets. Other autumn visitors were a good passage of 20 Skylarks, also 6 Starlings, and 2 Grey Wagtails.
Fifteen Wigeon flew north over little eye at dawn and a single Black-tailed Godwit was off to the east side later, but no Brent were seen up to 11.00hrs.
On the ground were 2 Song Thrushes (1 from 2 days ago), 6 Pied Wagtails, 2 Dunnocks, a Rock Pipit and several Robins that looked new in.
Ringed:- 1 Song Thrush, 1 Robin, 1 Linnet.
(CJ,PSW,et al) [551] photos CJ (above left in flight), PSW (above right)
Posted by Colin at 12:49