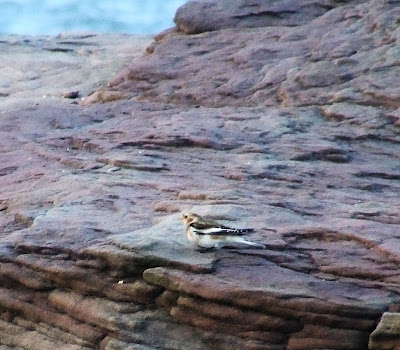 The first Snow Bunting of the winter (left) was feeding around the north end this morning for a couple of hours and then appeared to leave at high tide. 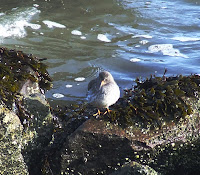 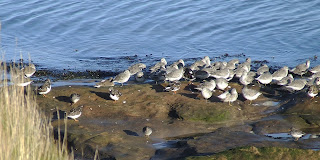 Another sign of the coming winter were 4 Purple Sandpipers (above) amongst the roosting Knot and Turnstones (left). Surely this time these birds will stay at Hilbre to became the basis of they regular flock and are not migrants travelling further south.
The Great Northern Diver is still in the area and 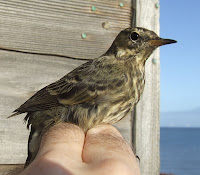 may remain for other visitors to see in the days ahead.
A redwing overhead at dawn was not the precursor of a thrush movement but finches were in evidence with both Greenfinches and Chaffinches being seen in addition to some Linnets. Two hundred Starlings were counted during the morning.
One of the 3 Rock Pipits was trapped making a record total of 4 in one year.
Ringed:- 1 Rock Pipit (right), 1 Robin, 1 Wren.
(JE) [579 ] photos JE
Posted by Colin at 23:54