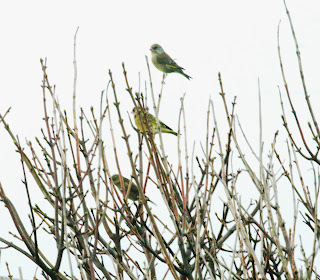 Despite a north easterly overnight it was all quiet around the trapping area this morning except for a single Blackbird, 2 Dunnocks and a flock of 8 Greenfinches that kept together and stayed mobile (left). The best birds of the day were all from distant flight views seen looking south from the obs veranda :- 2 Canada Geese, 4 Greylag Geese, a Sparrowhawk and a Great Spotted Woodpecker, also some very distant duck, probably Tufted.
Passing through but not alighting were 3 Grey Wagtails and 16 Skylarks in ones and twos.
Noted between the islands were 4 Wigeon and later 11 Pale-bellied Brent, and on the shore were a total of 300 Knot (below right) and a large count of 9,000 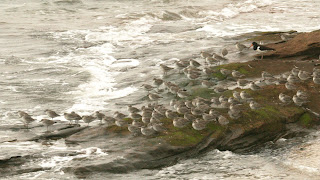 Oystercatchers spread over this part of the estuary.
A sea watch at high tide produced 3 Red-throated Divers but very little else apart from the sighting of a Porpoise close to the north end for a short time.
Later in the morning the sun appeared and a Red Admiral butterfly and a Silver y moth were flying.
Ringed:- 1 Dunnock
(GB,CJ,KMc,et al) [557] photos CJ
Posted by Colin at 14:25