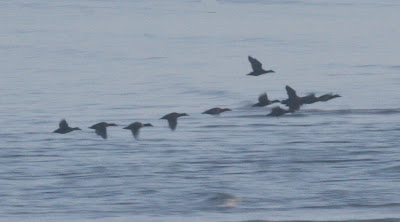 A beautiful morning after early heavy mist found a group of 13 Eiders loafing to the east of the island until they circled around and flew off north (left). A Sparrowhawk was on the island from first light and another later arrived over the sea from the Red Rocks area.
Only 10 Blackbirds and a single Song Thrush today whilst also feeding up were 4 Goldcrests but no sign of yesterdays Firecrest. Again no Redwings apart from a single flyover early in the day but there 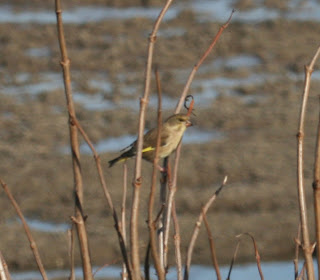 were a good trickle of finches all morning including 39 Goldfinches, 20 Greenfinches (right), 3 Chaffinches, 41 Linnets, and 6 Siskins. Although there were no large numbers of Meadow Pipits, 46 Skylarks went through mostly in small groups likewise 54 Starlings passed during the morning.
The Brent Geese have reached a new high of 47 and there were no less than 9 Little Egrets present, mainly to the east of the island early in the day.
Ringed:- 3 Blackbirds, 3 Goldcrests, 1 Greenfinch.
(DB,CJ,KMc, et al) [687] photos CJ
Posted by Colin at 14:53